In order to kick off this month’s festivities The Infection would like to direct your attention to a favorite web comic of Poison Apple’s. 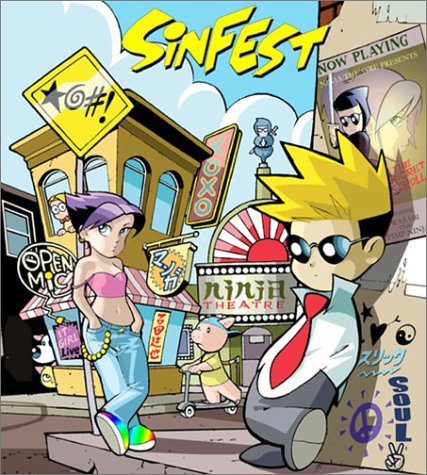 Sinfest, a web comic by  artist Tatsuya Ishida is a comic that follows the lives of a multitude of characters while mainly focusing on issues of human nature. This comic isn’t for people who are easily offended by religious or sexual joke material. Which is why Poison enjoys the comic.

Aside from being offensive to the religious or conservative, the comic itself boasts quite an interesting art style. Drawn in a very manga/Japanese comic influenced style but written for an American audience, Sinfest is not only visually pleasing for those who enjoy the style that are situated in North America, but it’s also got issues we (us North Americans) can relate to.

Sinfest popped up on the web comic scene on January 17th 2000 and has been running strong for a good nine years now. Updates usually happening daily since 2006. Due to some of the issues tackled in this comic and the type of humor, it’s no surprise that this comic has been rejected for syndication multiple times. Here at The Infection we find that to be a bit of a shame as we do enjoy exercising our rights to free speech.The good news is that the comic is available in anthologies that can be purchased on the Sinfest website, so don’t lament you can still get this great comic in actual book form.

The comic features a colourful list of characters with the reader first being introduced to the defacto main character of the comic, Slick ,who is selling his soul to the Devil in the first comic.  It’s quite obvious from the get go that this comic is not one for the religiously sensitive. Other characters that may offend people are Jesus, Buddha and even God. The comic follows the lives of all these characters and their trials and tribulations as they deal with many issues that we tackle in our lives from a very humorous angle.

The Infection, or at least Poison, suggests that you dear readers add Sinfest to your daily reading. Not only will it entertain you but it may enrich your life by adding a humorous twist to some of the problems in your life and letting you know- it’s not all that bad, we all go through it.

Entertain us with your thoughts!