If you don’t know what the large and awesome picture is supposed to represent then you will need to read past this paragraph. If you do know what that picture symbolizes then you’ll have a great idea of what the fan project I’ve begun to work on is based on which means you can stop reading. That, my friends, is the calling card of the Green Lantern Corp’s which is basically an intergalactic police force/army. Sometime this fall/winter you will all get to have the pleasure of reading about my misadventures as a Green Lantern.

So if you are reading this far into the article I assume you want to know more about how the hell this idea came to be…or something to that desired effect. I’m going to assume that the lot of you have read comic books before or have had the conversation with friends that usually begins with ‘If you could have any superpower, what would you choose?’ and this comic is the result of one of those conversations. This then led me to wonder…’What if I were to make myself and my friends into current superheroes?’ and we get my twisted version of the DC universe.

In this new DC universe I decided that I would cast myself as a member of the Green Lantern Corps and have the story take place with me as the main character. Alongside the Green Lanterns you can all expect to see other well known superheroes like Batman, Superman, Wonder Woman and other obscure heroes cast as my friends in this new comic. For all you original DC fans please don’t be alarmed as I don’t plan to completely destroy the personalities of the characters but beware that I will be editing origin stories and such. You can also be sure that we will be seeing the original Batman, Superman and other heroes in this at some point.

The hopeful release date for the first chapter will be sometime in late October or early November. As we approach the release date I’ll keep you all posted with new character designs and artwork as well as a preview of chapter 1 sometime before the release. Here’s some concept art of myself as Green Lantern…entertain me with your thoughts! 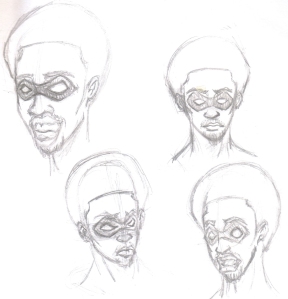 Now that you’ve seen some of the concept work, I’ve got a question for you all- if you could be any superhero in the DC universe who would you choose? Entertain me with those thoughts as well people!

One thought on “A Hero is born!…we think”