Alright people, it’s been a while and it’ll be even longer before you get to hear from me over here again. First of all, whats good y’all? What’s really good! Everything is just fly, fuckable and fantastic with me because I went to Fan Expo 2010 this weekend past bitches!

So yes, those of you who read my last post will know that I promised to do my one last post about Fan Expo and then I’m gone for the year. Dont worry, we’re recruiting more and more writers to fill my slot here so expect to see some improvements  ( I hear a collective shrudder of fear when I say ‘improvements’). Now enough time wasting and on with the post!

To begin, the weekend started with an incredibly long line .Even for the people who preregistered to get in there was a long disgusting line. Before you get a picture of the first line I will say this- pre register and get your ticket early because the lines are all obscene.  Now to see the first line on the Friday! 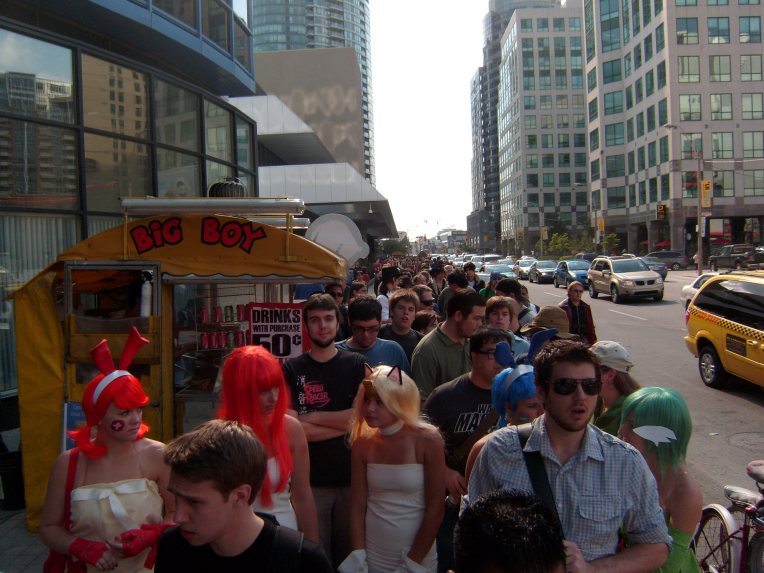 Alright, so a little bit of a geography lesson for those of you who do know Toronto or want to know Toronto. This line pretty much went almost from the corner of Front Street and John street all the way back to Front and King. Take note that this line was only a preliminary line to get inside of the Metro Toronto Convention Center and buy tickets to get in. Upon getting inside the convention center you’ll end up packed into the damn place like animals while being slowly herded to the front to get your ticket. Now I might sound like I’m complaining but what awaited me at the end of the line was nothing more than Nerdvana. It was well worth the wait. 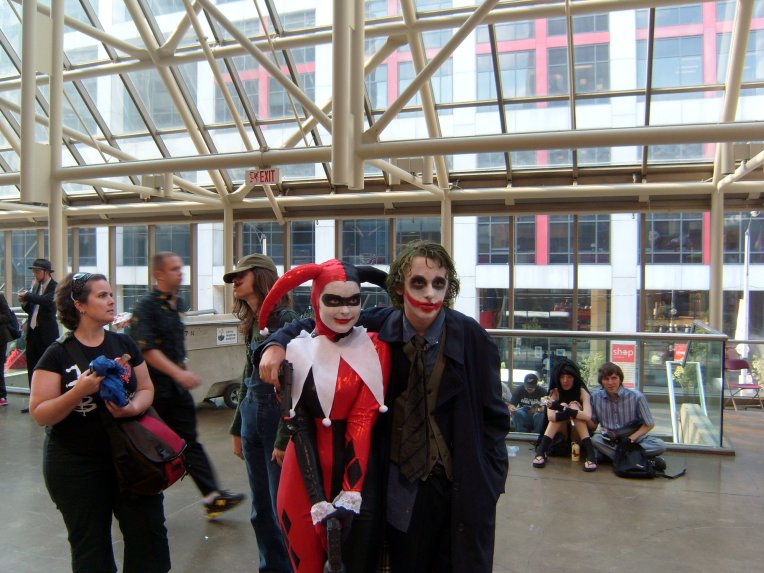 Alright, so after getting this wonderful shot of Harley and The Joker…my trusty camera died. Thus I was left to use my crap cell phone camera. to get some more pictures. From this point on I apologize for the decrease in photo quality on some of the pictures. Alas, I will say this- The LG Neon has a lovely camera and I’m surprised that i’ve never bothered to really put it to the test but it stood up this weekend past. It’s not your blackberry or iphone mind you but it does it’s job quite well.Moving on to Saturday…there were more lines!

This line wasn’t as bad as the line on the day before but it was still obscene. The place was packed on Saturday, packed to the point where some people weren’t allowed reentry after leaving to go outside. Upon knowing this fact I made sure that I stayed inside once I got in. My advice to those of you going to a convention this large- pack lots of snacks and juice to keep you going because it can and will get hectic trying to get food at restaurants nearby. Lines are going to be your new best friend that you just want to avoid.  The only good thing about this line is that there were alot more items of interest in this line than there were in the previous day’s line. There were more people in costumes going by, a Delorean minus the flux capacitor showed up and there were some crazy religious people walking around saying that Judgement day is on May 21st, 2011 while Armageddon is on October 21st, 2011. Picture time! 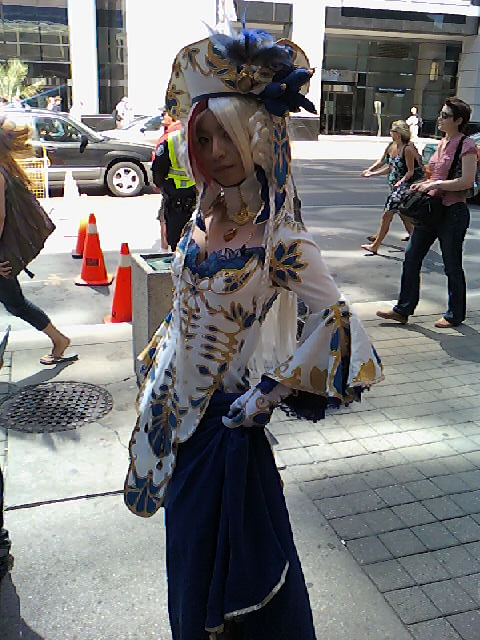 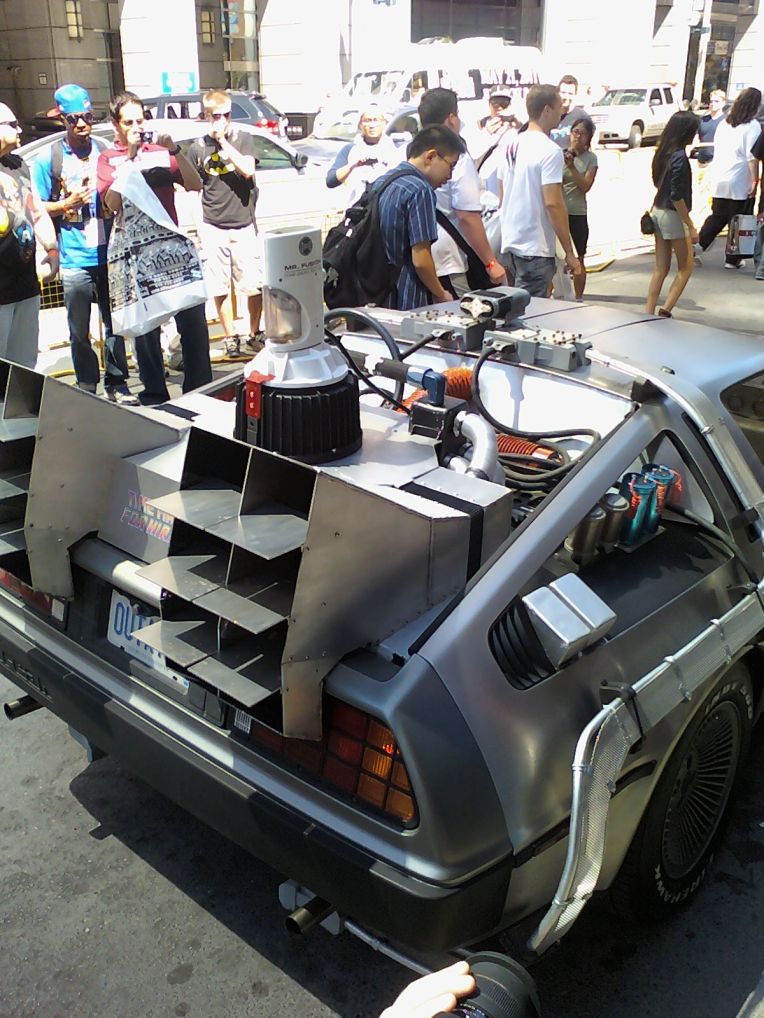 After a long ass interesting line, I got in for day 2 of Fan Expo 2010. I will say this- It was balls off the walls epic.  There were so many things happening that I had to get some of it on Video for you all to believe it. I saw Stan Lee, Yoshitaka Amano and Felicia Day all in the space of a few hours. I could continue to explain and reaccount every little mind numbing detail of my experience but the sad facts are that I have a life that needs to be lived. I’m going to wrap it up now and tell you all that the rest of the convention was great. I saw so many celebrities and saw so much great art that anyone who knows anything worth knowing would have had a massive Nerdgasm. I will say this though, getting near the celebs was hard as hell if not near impossible. The only person I got really close to was William Shatner and I have that on video for you all to see. Stan Lee was surrounded by security that would make the G20 summit security look like a joke to me…ok that’s a lie, I just didn’t get tickets to see him but he did have some big ass dudes with him.  Felicia Day and James Marsters were there too but the lines to see them just turned me off too much but I did try to get pictures of them signing autographs. I did manage to luck out and get a picture of myself with Heather Langenkamp which was cool. I also got alot of pictures of some of the most amazing cosplays ever which you can all check out on The Infection.

Now before I head out, I want to shout out to some of my friends who were exhibiting at the convention. These guys are really talented artists who I’m telling you to support! I also want to thank them for letting me kind of use their table as my base camp for the weekend, which was really cool of them. So please be good and check out the art of Sarah Anne Davis a.k.a SADCAT, Annie Hughes a.k.a Suka Strife and we can’t forget that Chib was there too so check them all out. Here’s a sample of what they had to offer!

As for myself, you can all expect to see me in person around other events in the GTA taking pictures and such so feel free to come and say hello whenever you get the chance. Once again it’s been so awesome being here this year and I feel so completed now that I’ve managed to clear this one last event and make one last long post for you all but it’s time for me to set out!

Keep me entertained and check out the facebook group for more photos and all that good shit!